Ok, What is this Mastodon Social Networking Thing and How Do I Move In?

Mastodon, how do I move in?

So, you are on Twitter and have used the platform for many years like I have. (I am @kpmitton on Twitter) Now we have had to deal with conmen, conwomen, narcissistic ex-presidents, white supremacists, liars, Nazis, anti-democratic power mongers, bigots, and racists. So we all would like a place where the servers are not owned by one company, or one billionaire, and where fake news and misinformation are not permitted. That is where Mastodon servers were born designed to take the best of the earliest forms of networking on the Internet when it was mostly UNIX-based, command-line computers and accounts. Think nodes, think neurons, think decentralized networks, yet think also about being able to follow and be followed by anyone with an account on any of many Mastodon servers. Still able to have followers as you could on Twitter but Elon Musk and Donald Trump have no say at all about the Network nor can they permit hate and lies with the excuse (used wrongly) of freedom of speech. This is how Mastodon works. Where do you find it, and how do you join it? It's as easy or as hard as it was when we all joined Twitter. We may fumble around a for a few days until we get the hang of it, but here is how to get there and how it works. It is no more complicated than Twitter, but better moderated by its users. That would be you and me. It does not run on commercial advertising revenue and it is not governed by algorithms that companies can pay to control who and what you see in a 1984 senario. How? Read on.

I will tell you right now that the easiest way to start with Mastodon is to use the App on your iPhone, iPad, or Android device. You can make an account from those apps. You can also go to a joining website portal. Before making your account, know this. It is possible to have your own username. On Twitter, I am kpmitton and in the Mastodon universe, I am also kpmitton. There is no one collection of servers run by "Mastodon". You might find you can make accounts with the same user name on different servers in the network, but that would not serve you well because users on any server can follow you and be followed by you from any server you live at.

Mastodon is really the communication protocol that people use to set up servers which are called "instances" or "Mastodon Instances". They are really similar to different people having their own websites on their own servers. For social interaction and communication, it is like having many Facebook servers and different people grouped on different ones. This is kind of true about the Facebook platform. Yet everyone can connect with each other in Facebook. You are oblivious to the fact that you and your best friend may have Facebook accounts that are residing on completely different servers. However, Facebook controls it all, they own rights to use your words and videos, and images as you store them there for free. They can also change the name of the game, and the rules of the game at any time and you have no control over it. If Facebook decided to start charging $10 a month for your Facebook account, they could, they are a private company, and fundamentally a business that exists to make a profit. Same for Twitter, Instagram, Snapchat, and WhatsApp.

In the Mastodon universe, you see and know what server your account resides at. It is like your server is a particular town or city and your username is also linked to that address. Mastodon users with accounts on other servers can find you by searching your user name (kpmitton for me), or they can directly find your account with your full address. My "town" server is called "TechHub.Social" and it was started by a guy named Nic. A programmer.

BEFORE you make an account browse the servers, or instances, available. Servers have been set up in this new social network by persons with various interests, so you may find one that is for journalists, or technology persons like myself (there were no bioscience ones, but biotech is tech too). These servers can often be joined by anyone, even if you are not a techno geek you are welcome to join Techhub.social. Do not rush, servers are not going anywhere. Then pick one and make an account for yourself. Again, you can start from the phone apps for Mastodon (in the Apple Store, or Good Play) and they will let you pick your user name, register your email, and be associated with one of the many servers now set up around the globe. Even some companies and institutions and newspapers are setting up their own Instances (servers) using Mastodon's open-source code. Servers have been set up for different parts of the globe, different work interests, arts, humanities, social connections, disabilities, and different Human Communities. No Nazis though. Not permitted.

If you want to use a website from your laptop, you can join Mastodon at  joinmastodon.org . Again, do not be confused by all the server instances. No matter which one you join, you will have access to the entire collaborative community. If you are a photographer or editor, you may want to join a server that was started with your community in mind. A good place to make contacts with others who have your immediate interests. (Currently, 11/20/2022, there is NO mastodon.org. That domain is reserved but not used. Use JoinMastodon.org for web browsers.)

I chose to join TechHub.Social, an instance of Mastodon server set up by a fellow Canadian. (Turns out he is from Quebec. I was born in Quebec as well, but alas, I am an Anglophone Quebequois, not very French. But I bet we both like the Habs? Maybe we both like St. Viature Bagels in Montreal?) The Mastodon Apps are just like the Twitter apps in your hand. You see your posts (Toots I call them, elephants and mastodons toot, right?), and who you follow and who follows you. On my laptop here is the web version of my view right now using the "Light" colored option: 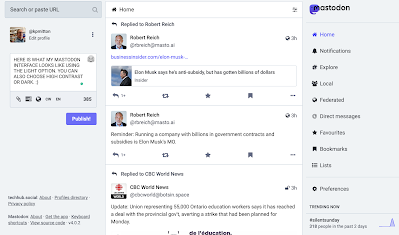 And here is my view when I select the "Dark" colors option: 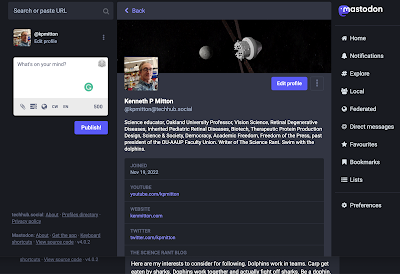 As you can see I have set up my profile picture from the Edit Profile option and added an Artemis-1 screen capture from NASA's mission tracker. I love NASA and space stuff :). I have started to add people that I follow, and some have started to follow me back. Here I can scroll down, like we do on Twitter, and read the posts in my personal feed from those I follow, or topics and #hashtags that I can set up to watch as well. Note that we can repost other posts too as in Twitter. In Mastodon, this is called boosting. 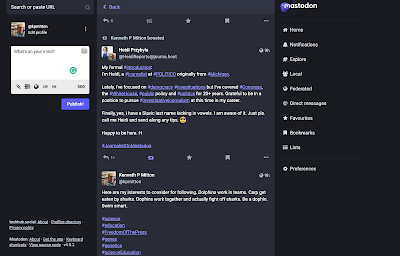 In addition to seeing posts from those I set up to follow, I can click on Local and quickly see the recent posts from my local group or instance, that is the "TechHub.Social" server in the Mastodon federation. Like the Neural Retina that I study as a scientist, this federation is sort of like creating a whole field of vision from a network of photoreceptors. Vision is decentralized, in that if you lose photoreceptor "instances" in one part of your visual field, you still have the rest of your visual field. To take out your vision, you would have to neutralize the entire eye or take out the entire Internet to break Mastodon communication. Even if the Mastodon server I use was taken away, I would just move my account to a different server of which there will be thousands. All over the world. Servers are set up and communities of users chip in a few bucks to support having our servers up and running and we communicate and can share information. Follow and be followed. No Musks or Trumps or Nazis to cramp our Democracy.
Find me on Mastodon. Look for kpmitton or kpmitton@techhub.social from inside your Mastodon. Think the bird is cute? So are Mastodons, as you can see from the info page of the techhub.social instance, set up by @Nicdex: See https://techhub.social/about 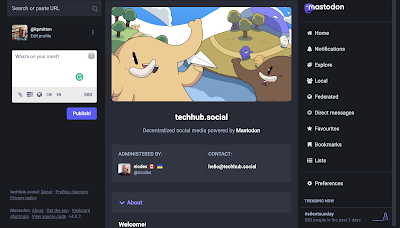 2) Browse around the different community interest servers (instances) available around the globe. Most let anyone join, but you may find one already started by persons in your career, hobby, or other interest. Some are just for social networking. It's kind of nice to belong to a specific server, yet be fully connected to the full network.

3) Make your account on the Mastodon instance (server) you choose.

5) Send your friends your user name in Mastodon and invite them to join and find each other.

6) I am @kpmitton@techhub.social (my account is based on the server with the domain name TechHub.Social, and it links and communicates in the greater Mastodon federation).

7) Enjoy no ads, and no longer have Elon Musk control what you see or follow. Also enjoy a place where it is not permitted to participate if you post misinformation or promote hate, antivaccine information, and other such harmful activity. LGBTQ community is welcome and attacks on persons or communities are not allowed to participate in the Mastodon network. 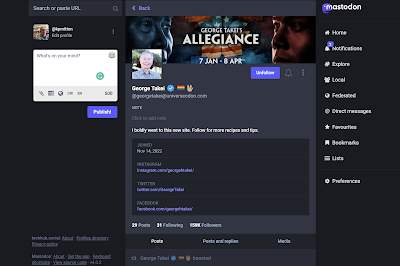 Remember. You can be your own scientist. Knowledge is power.

A COVID19 virus walks into a bar and asks the masked bartender for a dark draft beer, hands $5 to him, and watches the game on the TV. COVID finishes his beer and goes to the bathroom, and returns to find $5 beside his glass refilled with beer. Amused, but pleased, COVID enjoys a second draft, and hands the $5 to the bartender again. Soon COVID heads off for another bathroom break and returns to find his beer glass again full and the $5 again. "What, did I win free beer today or something?", he says to the barkeep. No, you are just really popular with those two guys over there in the corner booth and they insisted to pay for all your drinks.  COVID turned around, letting eyes adjust to the dimly lit corner booth, and who did COVID see?....