APOLLO 11 TRACKER: the Pandemic Lockdown Edition for NASA Lovers like me.

This is the updated version of my Apollo 11 blog in real-time, last July 2019 recapturing the mission of Apollo 11. I have reposted this for anyone stuck at home during our COVID19 pandemic stay-at-home activities.

VIDEO: Why Coronavirus (COVID19) is not like the Flu, and how you can save lives staying home.

So, you are young or annoyed about wearing a face mask in public places like stores and airplanes? Do you think this pandemic is no different than the common flu? Well, you are wrong and with two simple numbers, I can show you how YOU can be responsible for either infecting and killing several fellow humans or help spare them by breaking the chain.  These numbers are 1.4 and 3.  They are tiny numbers, but they explain why COVID19 is causing many of our most vulnerable citizens to lose their lives in ICUs all around the United States and the world. Mostly in the United States unfortunately where many people are refusing to help protect others.

I have prepared two graphs using data available on April 19th, 2020 from the Our World In Data resource. 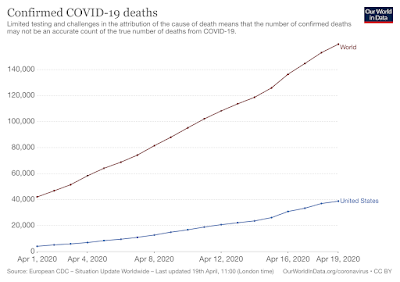 2) The second graph compares the fatalities over time for many countries including the United States, Canada, UK, France, Germany, Spain, Italy, Brazil, China, India, South Korea. The useful information here for the U.S. is to note that the rate of fatalities in the United States has increased dramatically in just the last week and is the greatest rate worldwide as of April 19th. 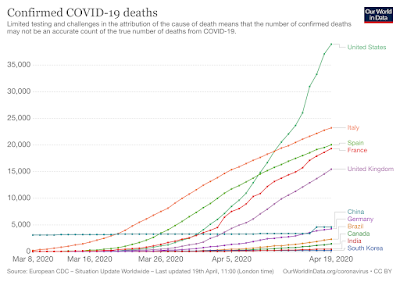