SUPER DUPER
That is a little program that I purchased several years ago and continue to use to backup our most important Mac. The home Mac. I started back with our white plastic iMac from 2005 that had a gradual power board issue many years later. The backup drive created by Super Duper was not only a backup of files it was much more. It was a fully Bootable copy of the original hard drive. This was important, because it gave us a way to keep using those user accounts to get work done while obtaining another iMac. That is the magic of one of Super Duper's backup options.


While awaiting for a used iMac to arrive, we simply plugged the external backup drive into another Mac and booted from that external drive. The external drive was an exact copy for all practical purposes of the system, programs and user files from the busted iMac. So my spouse and children could just keep doing their work. This was important as my wife homeschooled our three kids all the way to university, while she taught biology and chemistry for elementary and high school at several schooling co-ops. We could not afford downtime.
Then when the next iMac arrived, we simply booted it with the Super Duper backup drive and had Super Duper copy back to the new iMac drive. Then continued as before.
The big advantage of Super Duper over many other disc copy programs is that you do not need to have both disc volumes the same size. Many programs require both disc volumes to be equal. So you cannot make a 1 GB backup drive from a 500 MB drive. You would have to make a 500 MB volume partition on the destination drive. Super Duper had no difficulty making a bootable copy of our older 250 MB hard drive on a portable 1 GB USB pocket hard drive. Super Duper uses the "smart update" option for this.
Like all backups, the first run will take an hour or two to make the copy. After that smart update just erases and copies the external drive to make it an exact bootable volume copy of your hard drive. This takes about 15 minutes, once per week. Regular or solid state drives. If your computer fails or it is stolen, you can immediately keep working by borrowing another Mac and booting from your backup drive.
These days we have a Mac Mini. As it was a newer system, we simply used the startup option to transfer user accounts and programs from another Mac. We just used the Super Duper backup drive for the source of importing. Then once the Mac Mini was set up, we ran the Super Duper program from the Mini to continue the sync with the same backup drive we have uses since 2010.
This is a great program that was only $29 when I bought it in 2010, and the Super Duper program updates itself for me since then, as promised.
I have now tested it through real-life computer failure and computer modernization, so I know it works.
I do use Time Machine on Macs at work, mostly because its just available. But, I have not had the need to find out if Time Machine will save the day, should a drive fails sometime soon. I have an old macbook from 2005 that still runs, not my laptop now, but that is the big advantage of a Macs too. We usually only have to replace them when they get too old for the modern internet, not because they fail. 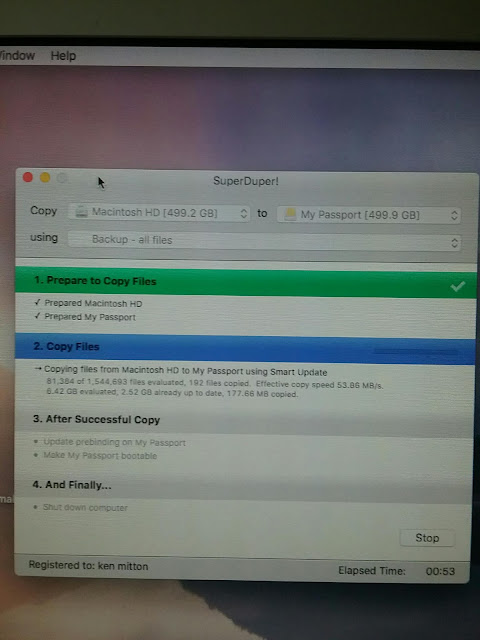