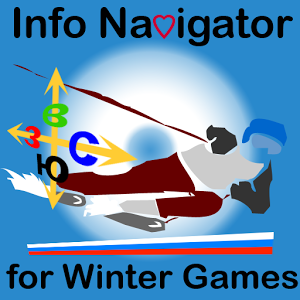 This FREE Android App links you to information for world wide amateur and pro sports, including the Paralympics, Olympics, and Special Olympics events. Between major games, the App continues to provide news on amateur and professional sports worldwide.  This App helps you stay connected to IOC official websites, Facebook, Twitter and YouTube feeds. Also, major world sports media outlets that report on the games from the United States, France, Canada, Australia, and the UK.


You can get the App from Google Play store at the link above, or you can also get it from Amazon's App store, just click here => AMAZON.

Unlike the other Free apps, Info Navigator for Winter Games does NOT have Pop-up banner ads.

That is my contribution to supporting our amateur athletes. So support your Nation's Olympic and Paralympic team, and pass this blog on to your friends. You can also find the App in Amazon's App store, if you are already using a Kindle or KindleFire.

My App includes Android based Navigation to see where the Paralympic winter games venues are located. There are two clusters of venues: the coastal venues on the Black Sea coast, south of the City of Sochi, and a mountain cluster, inland from the coast. This feature uses the Google Navigation features of Android and you can view in map or satellite imagery modes. If you happen to be in Sochi, you can activate your phone or tablets GPS and use it to navigate relative to event locations. Maps for the most recent summer games, London 2014, are still available in the App as well.

This App is quite small (2 MB) and will work on a very basic Android phone using Android systems from 2.3.3 and up.

So if you love following sports and athletics you can use this App 365 days per year, during and BETWEEN Olympic games.

Free from me to you. So please share the link with your friends. Pass it on and enjoy.
The App will be updated more as we get near to the Sochi games.

Design Notes on the App's Icon:

The letters in the App's Icon are from the Cyrillic alphabet and represent North, South, East and West as they would appear on many Russian nautical compasses. The white, red and blue stripe background represent the Russian flag of course. The rainbow colors of the SOCHI letters represent inclusions of all peoples no matter their race, color, religion, or sexual orientation. I would like to point out that the Olympic's official five ring symbol is also rainbow colored, is it not?